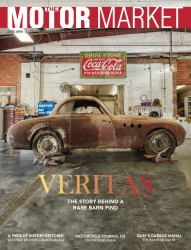 Eighty-five years ago, the Dodge Brothers Company produced approximately 16,000 units of the 1933 Dodge Brothers Commercial Car Model HC, according to enthusiast, Terry Downing of Redfield and Lead, South Dakota. Many of these models disappeared as they were used for scrap metal during World War II, and others were modified for hot rods. Downing, owner of the rare 1933 Dodge truck, has done his research, and found that “only around a half a dozen of these models exist in their original condition.” His ’33 is one of the three that he’s found currently registered with the Dodge Brothers Club.

This rare find is one-of-a-kind, and it’s a wonder it survived the years. Downing found the car on one of his many travels. A graduate of South Dakota School of Mines, Downing traveled the United States and Canada for his job in the mining industry. While living near Victorville, California, approximately 20 years ago, Downing saw the old truck hidden in the weeds behind a shop. Downing wanted to restore a truck, but he wanted to work on a project that was unique and interesting. He stopped to talk to the shop’s owner, struck a deal, and brought the car home. Downing said, “From what I remember, the gentleman who sold it to me told me it had been a ranch truck in Arizona.”

According to Conceptcarz: From Concept to Production, “The all-new Dodge Brothers 1933 truck line was divided into two distinctly separate series – the Standard and Heavy-Duty. Standard models were powered by four- and six-cylinder engines, Heavy-Duty models exclusively by sixes. The truck styling was borrowed from Dodge's passenger car line and were consequently dubbed the 'Glamour Series.'”

Downing’s Glamour Series pickup was in poor shape, understandably – it had already lived one lifetime. He wasn’t able to begin restorations right away, but eventually, started working on the Dodge on his own.

“I started restoring it and found out that I didn’t have the skill level. Taking it to Eric was the best idea I had in restoring the truck,” Downing admitted. Eric Caulfield, owner of The Body Shop in Bradley, South Dakota, completed the mechanical work, body work, and painting.

“The restoration took about two years. It’s like going on a scavenger hunt – there were parts from other pickups around the country. Locating the parts was difficult, and they are all steel. We had to call private sellers, ‘you-pull-it’ lots, junkyards, and anywhere we could find parts,” said Downing. “We wanted to keep it original. We had to find a new left front fender. It seems that the Model HC had possibly been rolled on its left side. We also had to get a new radiator, repair all the fenders, and repair the bed.”

At some point in history the truck’s front end had been pushed back (possibly at the same time it was rolled on its side). Additionally, the rear fender had to be completely refabricated.

The restoration required much welding that focused on trying to get the truck’s parts realigned. Although the truck was rusted, bent, and cracked, and the back of the cab was completely rusted out in various places, it was closed up and filled in with metal.

Under the hood, those admiring the beauty will find a completely original, an L-head 6-cylinder, more commonly known as a “flathead.” The transmission is an old-time simple 3-speed manual.

“The suicide doors caught my eye; in ‘33 and ‘34, Dodges were manufactured this way,” Downing added.

When these doors open, an entirely different part of the restoration reveals the pristine interior. The panels of the doors and the floors have been restored with wood panels. The flat door panels allow for a wood medium. A custom design by Eric Caulfield was manufactured by Keller Cabinets of Wallace, SD. The panels used a birds eye maple outlined in a black walnut, adding to the aesthetic and uniqueness of the historic truck.

One of the Dodge’s first debuts after restoration included a drive from Spearfish Canyon Scenic Byway and up Aztec Hill in August. Downing and Caulfield drove the scenic route together as Downing explained, “We wanted to give it a try and see how it would react to the uphill and downhill to make sure the transmission and engine would handle it.” The ’33 had no problems in its return to the road.

Before it had been completely finished, this revitalized piece of history placed 3rd in its class, Custom Pickups, at Kool Deadwood Nites. In the near future, Downing hopes to take it to Minneapolis’ Mopar in the Park in June, the Fourth of July parade in Redfield, and various car events in Faulkton, Custer, and Highmore. No matter if this priceless beauty ends up in a museum or in a parade, wherever it goes from here, Terry and Jean Downing’s ’33 Dodge pickup is destined to turn heads, crane necks, and drop jaws. ?