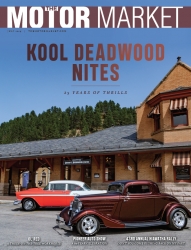 In 2011, The Motor Market’s Steve Michels had the opportunity to meet with the family behind the infamous “Big Show”, better known as the Pioneer Auto Show located in Murdo, SD. This third generation, one-of-a-kind tourist attraction is still thriving today and keeps the tradition of baffling visitors. With rare vehicles and memorabilia on display, this nationally known attraction brings celebrities and regular Joes to the town of Murdo to see what the Geisler family has built at the Pioneer Auto Show.

By opening a Phillips 66 gas station in 1950, and having vehicles on display, AJ “Dick” Geisler got his start at seeing how a large car attraction would be a hit in Murdo. After growing his small display at the station to a modest collection, Dick soon realized he needed to branch off this adventure and build somewhere to store these collectibles. David Geisler, Dick’s grandson, noted in TMM’s 2011 article, “By 1954, he had accumulated enough cars that he needed a place to store them. He built a building for them and charged $0.50 admission to see them. After Grandpa passed away in 1973, my Uncle John ran the Museum for the next six years. He did a great job of collecting. He had a great knack of knowing which cars would grow in value.” While John was handling the collecting side of the business, David’s father, Dave, handled the promotion and advertising for the Pioneer Auto Show. According to Dave, “Dad died about the time the interstate came through. He would have been proud how his vision has been realized.”

While this attraction is nationally known, the Midwest feel of business is familiar to visitors. As born “people persons” David and his staff enjoy what they do for the customers and the looks on their faces when they enter the attraction. Today, the Pioneer Auto Show consists of 47 buildings containing displays specializing in antique and vintage cars. The display has also grown to include a large variety of antiques from old music boxes, jewelry and toys. David mentions, “For the most part, our customers do not expect what they see when they visit us. The sheer number of exhibits can be overwhelming. They love the variety of items we carry. It has taken us over 60 years to collect our pieces. The collection was not just pieced together. We felt we needed the ‘stars’ of the museum. We need those things to get people’s attention, like Elvis’ motorcycle and other unique things for everyone in the family.” Other ‘stars’ of the show include The General Lee, and even ‘Eleanor’ from “Gone in 60 Seconds” for a time. Keeping their displays ever-changing, there’s always something new to see at the Pioneer Auto Show. But what they are most known for is the ’26 Nash that is on their promotional items. Dave says, “It was owned by a local businessman who operated a welding business. He customized the front end of the car so he could fit some equipment in it. It has been sitting out front ever since. It has become a trademark of ours. We put it on our sign and on our billboards. The sign is iconic. When it blew down in 2010, people called and told us we had to get that sign back up. People in Murdo said they felt like they lost a dear friend.”

Not just for the fellas, this wonderful attraction is also interesting for women and children of any interest. Although most women do not initially feel the need to go through the museum with their significant others, they cannot help but take the tour once they see the size and quality of the collection. “We strive to be an attraction the entire family can enjoy. For example, we have one of the most extensive music box collections in the world.” And with the addition of toys and memorabilia, there is truly something for every member of the family at the Pioneer Auto Show.

Despite suffering a stroke in the summer of 2010, Dave is still actively involved in the daily operation of the attraction. Dave’s children, Vivian and David, are also very involved in the family operation. After growing up in the business, David continues the traditions set forth by his father and grandfather. David remembers, “Dad used to go to the car auctions in the winter in Arizona. He does not go to as many auctions today, as we have a lot of people contacting us trying to see if we will buy their items. He has a great repertoire with these people and has purchased multiple items from them. Tourism is a passion for me. The attraction is open year round but our busiest season is April through September.” With the number of guests reaching anywhere from 200-700 guests a day during the peak season, and 40-100 guests a day during the off-season, there’s certainly something to see in Murdo. “We have a lot of dollars invested in our exhibits, but putting smiles on people’s faces is our real return. It is fun to visit with customers that are passionate about our collection.”

After being featured on History’s “American Pickers” television show multiple times, the Pioneer Auto Show grabs the attention of a few celebrities as well as local folks. As mentioned in TMM’s 2011 article, “He [Dave] has had many celebrities including presidents and actors go through the collection. ‘Ted Turner stopped by the museum one day. Dad enjoyed lunch with him,’ says David. ‘We have also had some well-known musical groups and one of the Baldwin brothers stop by.’” Although they do have celebrity visitors, the main customer base is in repeat customers. Dave says, “The customer base changes. We always want to have new additions for them. The younger visitors can relate to muscle cars and their life experiences. We get more neat little stuff besides the cars, like the Chicago Coin Box and other displays related to Disney. It is so exciting to find new and neat stuff. I guess we are addicted to it, but the smiles and great comments make it all worthwhile. God is good.”

If you’re on the interstate, and you see the billboards with the ’26 Nash, be sure to stop by for a visit to the Pioneer Auto Show. With 379 total vehicles in the collection; pioneer town, depot, one room school house and other historic displays; 71 total motorcycles; 60 rare tractors including a Porsche, Lamborghini, and Waterloo Boy; and other rare finds, it’s something you won’t soon forget.