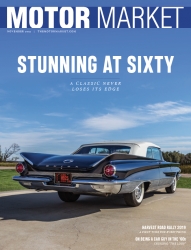 This summer I reconnected with an old childhood friend, Ross. He rides a Gold Wing Aspencade, and the more we talked, the more I found that our riding styles and attitudes were very similar. I suggested that we do a ride neither one of us have done before, a road rally. Brion aka “Frump” had told me about these before as he is a member of the Glacial Lakes Motorcycle Club and they put on a couple of these a year. A road rally is basically a scavenger hunt. Usually there is a different theme for the things you have to find for every rally. Checking their website, I found the Harvest Road Rally on October 5, 2019. The rally ran from 7 AM to 7 PM in Hutchinson, MN with the theme of “Small Town Pride.” I registered us as novices after checking with the Rally Master, Alvin Bertram, from Fun Sports of Hutchinson and booked our hotel.

The Wednesday evening prior, we got an email with the list of 52 “bonuses” for the rally. These showed locations in which we would find items to either document or photograph for points. Listed was the name of the town, the GPS location, and driving directions. Not listed were the questions or tasks, or the varying points for that bonus. Those would be given out at the riders meeting. Wednesday night before the rally, I had Minnesota maps laid out on the kitchen table plotting out all 52 locations. Raina, who is 12 and being taught map skills in school this semester, came out and asked, “What are you working on? Homework?” I explained to her what the road rally is all about, and she asked, “And you’re doing this for fun?” Yes. “And what do you get if you win? A sticker?” Go away kid, you bother me!

Friday afternoon, Ross came over early so we could try and sync up my Cardo communicator with his Sena communicator. After many trials and tribulations, we found that the microphone on Ross’ Sena was not working. So much for ease of communication during the rally. The eyeglass shop then called me to let me know my new glasses were in. I’m going from no correction due to Lasik surgery in 2003, to no-line bifocals now. (Old age is catching up with me.) The technician couldn’t believe I was going to wear them on a motorcycle for three hours right away; my thought was I would have to get used to them somehow. She warned me about using stairs and tripping on things until I got used to my glasses. What I found is that once I got on the motorcycle, I felt like I was eight feet up in the air. I did find that bringing my helmet into the shop when I picked out my frames paid off because they are really comfortable with my helmet on. We set off for Hutchinson with me feeling like I was riding on top of a ladder.

Once we got to town, we headed to Fun Sports of Hutchinson for the informal meet up and pizza. We spent the evening meeting other riders and exchanging stories. We didn’t stay too late as we had to be back there in less than eight hours.

The weather forecast was spot on for Saturday. We woke up at 4:30 AM to heavy rain, but luckily no thunderstorms. We got to Fun Sports and had both soaked one set of gloves already. At the 6 AM riders meeting, we were given our packets with the remaining information for the bonuses, the three extra combos and an explanation of the rules. We were low-tech with our maps out; some guys had their laptops or iPads out computing their whole route. We were also told that in the afternoon we would receive a text about an additional bonus if we brought back a specific item that they requested. The rest of the day, I kept expecting a text from the Knights who say “Ni!” who want us to bring them a shrubbery! One that looks nice and not too expensive.

A few riders left right at 7 AM, but Ross and I waited until the sun was almost fully up at about 7:45. Our plan seemed very ambitious given the weather, but it was worth a shot. The plan was to go west and then north to try and get the Statues combo and some high point value bonuses along the way. We avoided going south and east as we wanted to see areas of Minnesota we had never seen before as well as enjoy the fall foliage. We had the same attitude – let’s just have fun, it’s not like there is a cash prize or anything. I mostly led, Ross followed, I wrote down bonus answers while Ross took the photos needed. We had off-and-on rain all day and went through another set of gloves before noon.

Ross wanted to stop at a farm supply store to get some chemical-resistant gloves to wear in the rain. When we came across a Runnings, it was nice and sunny and he decided to keep riding. Big mistake – as we left that town and headed north, the weather changed back to rain. Opportunity missed. About 1 PM we got to Alexandria and stopped to eat lunch. This would be a good time to warm up, get out another pair of gloves, and see if our game plan was working. Here I realized our mistake of not getting a picture of the Lutefisk Fish Statue in Madison. Now there was no way to get the Statues combo, so we had to figure out what we could squeeze in on the way back to make the 7 PM cut-off time. We had hit 6 stops and only 269 points so far. The weather had slowed us down. For the text bonus, the message came that the Rally Masters had forgotten about dessert for the banquet, and that any rider to bring in a pie would get 10 points. Luckily, I made a wrong turn outside Montevideo, and while turning around we spotted an Amish goods stand and they had PIE! We stopped and got a pecan pie and raspberry pie, because a Gold Wing always has room for such. The vendor tried to sell us five-gallon buckets of apples and potatoes too! He must’ve seen how cavernous Ross’ saddlebags are. We wanted to hit six more stops, but at the fifth one we decided not to push our luck and headed back to Hutchinson. We just happened to get behind another team of riders from Wisconsin on I-94 and followed them back.

We checked in at the Days Inn at 6:25 PM with 399 miles logged. We unloaded our pies, parked, and headed inside to wring ourselves out and check our log sheet before we submitted it. At submission, we lost 87 points for a misconception on my part of what was actually wanted for a bonus. I thought they wanted a picture of the blue 45th parallel marker sign near the Lutefisk Fish, but they actually wanted to know what the blue sign on the fish said. I chalked up our mistakes at Madison to being wet and distracted.

At the awards presentation before dinner, Alvin stated that when we signed up as Novices he noticed he had no Novice plaque, or any plaques for that matter as he forgot to order them. Ross and I won Novice class with a mere 363 points. This got us a plaque I can rub in Raina’s face – “See, it’s not a sticker!” We also got 13th place (ahem, 2nd to last) and won a set of GLMC.org motorcycle tie downs!

Sunday’s ride home was bright and sunny, with a stop at the Gnome Park in Dawson, MN to grab pictures for Heidi. The ride was super windy on Hwy 75 southbound, and it wouldn’t be that way if they would just turn off those giant white fans!

Ross and I had a blast and we are considering bringing our wives next time and competing against each other as husband-and-wife teams.