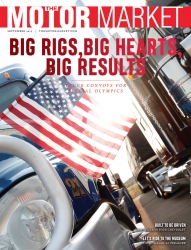 You may think that truckers and Special Olympics athletes are an unlikely pair, but when they join forces for the annual South Dakota Truck Convoy, the result is pure magic.

Here’s how it works: The Truck Convoy partners a Special Olympic athlete with a truck driver, and they ride together in the Big Rig along a designated route. In Sioux Falls, the route is 25 miles. In Rapid City, the route is 8 miles and features a drone stationed at Black Hills Harley-Davidson which shows the trucks departing, and people can watch from Facebook. No matter how long the route, the Convoy is an exciting and new experience for both truck drivers and athletes, and lifelong friendships are formed.

“This is a terrific event which raises awareness for Special Olympics and our 2,500 athletes statewide. The event grows bigger with hundreds more athletes each year,” said Amy Crawford, assistant Torch Run Liaison for Special Olympics South Dakota and the head of the Rapid City Truck Convoy event. “One hundred percent of the funds raised from this event go toward supporting our Law Enforcement Torch Run.”

The South Dakota Truck Convoy began in Sioux Falls and Rapid City in 2003 with an event being held in both locations for the first two years. In 2005, Sioux Falls continued on and has been going strong ever since. In 2014, the Rapid City Convoy was reinstated and is now growing stronger than ever. Since 2003, the South Dakota Convoys have had a total of 2,000 trucks involved, raising over $729,000 for the South Dakota Law Enforcement Torch Run for Special Olympics.

To participate, each truck driver pays a $100 fee before or at registration. During the event, both locations hold auctions for valuable items as well as for the prestigious title of Lead Truck, which is given at an awards ceremony. Corporate sponsors and community partners come together to contribute financially for the cause.

“What makes this event unique is the people who are involved,” said Crawford. “The Truck Convoy brings together law enforcement, truck drivers and truck driving companies, as well as athletes with physical and mental disabilities. Stereotypes are broken down between people who may not interact on a regular basis, and your heart grows a bit bigger when you get to spend time with these athletes.”

This year, several new activities will be added to the schedule. In Rapid City, there is a Strider bike course, where athletes can ride bikes without wheels—essentially holding on to the handlebars to walk their bikes—to navigate the course while truck drivers, families and friends cheer them on. There will also be a cornhole toss and dunk tank in Rapid City. At the dunk tank, an athlete can dunk a truck driver or vice versa. Sioux Falls will have a poker tournament this year.

Jessica Lambertz has been involved in the event for 11 years helping with registration. She is also a truck driver’s wife, which makes the event near and dear to her heart.

“The Special Olympics Truck Convoy brings something extra to the community with truck drivers and law enforcement joining together to help the athletes. The event shows that we have strong community support for raising funds and awareness for these athletes,” said Lambertz.

Joe Burmeister, who has worked as the Special Olympics coordinator at Black Hills Works for the past 10 years, helps coordinate the Rapid City Truck Convoy. He enjoys the event for many reasons.

“I think the greatest enjoyment I get is seeing the smiles on the faces of everybody involved. The Special Olympians' faces light up when they get to be around the trucks, and the truck drivers treat each and every athlete like royalty. It truly is a win-win for both parties,” said Burmeister.

Burmeister said his favorite memory of the Truck Convoy occurred during the event’s inaugural year. “It was amazing to see all of the trucks lined up, each one carrying a Special Olympic athlete with them, heading out onto the highway, blaring their horns. It truly was majestic,” he said. “The other thing I remember about that first Convoy is that I was riding along in one of the trucks to shoot some video of the event. And amazingly, as we pulled out onto the highway, about two minutes later, the song ‘Convoy’ by C.W. McCall came on the radio. It just seemed magical!”

The Truck Convoy event started in Florida in 2001 with truck drivers, law enforcement, and Special Olympics joining to create an awesome experience for all. Now, the Truck Convoy is an international event with 24 states and four Canadian provinces participating. For more information on this year’s South Dakota Truck Convoy events, visit http://www.sdconvoy.org/.

Other Convoy Supporters Who are Missed: