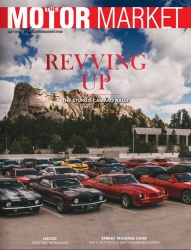 As people have gone through life over the last 100 years, cars have played a role in getting most everyone where we needed to go. Although most of us are not nearly that old, the impressions cars have left on us have changed dramatically. As cars came into the picture in the 1920s, it was thought of more as an occasion to go someplace just for a ride in a car. Cars were very simple then and because of their high ground clearance, could go just about any place off road that new cars can’t go today. Driving around the country blazing your own path, not knowing if you could get across a river or through a ditch to where you were going was quite an exciting thrill. Cars weren’t exactly safe then, but people weren’t afraid to go anyplace, driving them about twice as far as a horse could travel in a day (which made them a very appealing mode of transportation even at a 15 to 20 MPH imposed speed limit in some areas). During the depression in 1929, many American families set out to other parts of the country with all their worldly goods packed inside and tied to the outside of their vehicles. When the stock market crashed, it was a hard time for everyone – even with gas costing 2 or 3 cents a gallon. The bottom line was that cars and trucks moved families to wherever, changing their lives forever.

Over the years, many car manufacturers have come and gone because of overhead costs that continue in America today. It is quite sad that the true American-made car and truck companies that built the backbone of this country are fading away because of the new technology cost, the price of steel or aluminum, and the union wages that evolved because of big companies. The average cost of new cars in America the 1930s was $600 to $700. Thirty years later in the 1960s the average cost for a nice new car increased to $5,000 to $6,000. Today new cars are costing $35,000 to $60,000. Even though we don’t see a slowing of new car buying with them costing more, I personally think they should last longer because of their higher pricing. Don’t get me wrong, as I know cars and trucks are more trouble-free today and get better MPGs; it just doesn’t seem proportionate with income in America today.

Cars have truly been a social connection to what anyone does in America today going back 50 to 60 years. Although most of our car-related experiences have disappeared (drive-in movies, drive-in restaurants with car hops, sock hop dances, Dairy Queen, goofy golf, family vacations in a station wagon, just to name a few), the love for cars of certain time frames aren’t fading away as fast for older Americans. This is a good thing as I believe it keeps us young at heart while not forgetting what was once fun and exhilarating.

Gary Hyatt’s love for cars started out with working at Billion Oldsmobile when it was on South Minnesota Avenue in Sioux Falls, and continued in sales until he retired a few years ago. He and his wife Eileen, who is also retiring later this year, have always thought it might be fun to relive or recapture some of their younger memories by purchasing a convertible. So in 2013 they started searching for a ‘60s/’70s classic car type convertible. After looking at Mustangs and a few GM cars, Gary found this really nice original 1970 Oldsmobile Cutlass online located in North Carolina. After a phone call, it led to a few more pictures sent their way with Eileen loving the original color (Azure Blue), and they agreed to get it. Gary was telling me about an uneasy feeling of having it shipped to Sioux Falls and picking it up late at night. Although it worked out alright, he didn’t remember power drum brakes being so hard to stop a car like that when he was 18 years old.

As time went on, Gary had a few little things fixed on the car to make it look and function as it should, along with changing over the drum brakes to disc brakes on the front. Now it stops as it should without an effort. Later he had the engine pulled out and rebuilt. Being an Oldsmobile guy for so many years, Gary was happy to hear that the engine (after being taken apart) was totally original with its 26,000 miles. Today, Gary and Eileen drive the car as much as they can as long as it’s not snowing. In fact, Gary drove 1,750 miles in three days to Florida in December 2018 for their son’s wedding pictures. Gary was surprised after completing the three-day trek of 65MPH driving that he wasn’t as tired as he might have been driving most front wheel drive cars. There is something to be said about the ride these older coil sprung cars with a bench seat provides. It’s like sitting on a sofa in the living room while you are rolling along. Gary was elated to tell me about taking his son and fiancée out to look at Christmas tree lights in the Cutlass with the top down in 50-degree temps in Florida on December 23. He said even though it was cool temperature wise with the heater on, the Christmas lights were gorgeous and the sky was really lit up with stars. An overload topless moment!