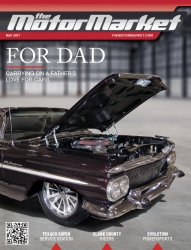 It’s a somewhat common situation, probably one you’ve heard in the past. There have been movies, books, country songs, and other tales of this sort of thing. After 25 years in law enforcement, and 47 years of wedded bliss, it’s something I should have been alert to, but I let my guard down.

There I was, in Las Vegas, “Sin City” as it’s called, for a major convention. After working the display booth for a few hours I needed a break. I started wandering the convention floor, looking for a place where I could get off my feet for a bit and have a drink. As I continued across the hall, I spied her! It’s like she was waiting for me, looking right at me. As I got closer, eye contact continued and I detected a subtle wink. I was alone and probably a little vulnerable. But now, she had my attention. I checked out her body; it looked great from any angle. Could this really be happening to me? I suddenly realized this might just be the most appealing new car I’d seen in a long time!

What??? You didn’t think I was talking about a car? Well, of course I was! This is The Motor Market, after all.

In reality, the story did begin somewhat like that. I was in Las Vegas working the SEMA show last November. In my leisure time, I found that the Chevrolet display not only had a fine collection of vehicles on display, they also had some nice seating areas where a person could relax. I took breaks in that area periodically, and over the course of a few days, I found myself really falling for the new 2017 Camaro 50th Anniversary Edition that was on display.

For those that aren’t aware, the Chevrolet Camaro was introduced to the world as a 1967 model. (The very first 1967 Camaro, VIN 0001, also happened to be on display nearby.) As some will point out, “no, Camaros haven’t been in continuous production all these 50 years”. But this is the 50th Anniversary of the Camaro.

Chevrolet normally does a nice job with their anniversary editions, and I found the Camaro “Fifty” to be no exception. The Anniversary Edition is only offered on the 2LT and 2SS models, and it only comes in one color: “Nightfall Gray Metallic”, with orange and grey striping on the hood and deck lid. Orange stitching accents the black and grey leather seats (SS model) and interior furnishings.  “Fifty” emblems adorn the vehicle in a number of areas, inside and out. Special 20 inch wheels with an exclusive center cap and orange Brembo brake calipers dress up the rolling stock. The front end carries a very aggressive look with a specific grille and body color front splitter. Illuminated door sills display a “Fifty” logo as do the front fenders.

It was almost more than my hard-core Chevrolet heart could stand! I sent my wife, Joyce, a couple text photos and we had a short conversation about the great styling and price. Several days after my return, a Camaro conversation began again and within a short time, we decided to explore the possibilities. I contacted David “Toby” Donth at Papik Motors, in Luverne, MN, where we had bought a previous Camaro SS, a 2001. Papiks actually had an Anniversary Edition in stock, but it had some options we weren’t looking for. David helped us spec one out as we desired; we came to terms on the price, and placed our order. Delivery was projected to be about 8 weeks.

So, how did we equip the car? We ordered the 2SS which includes the 6.2L, 455hp engine, heated/ventilated leather seats, head-up display, 8 speaker Bose sound system, four selectable driving modes, back-up camera, and a host of electronic features. For options we ordered only the 50th Anniversary Package, 8 speed Automatic Transmission, Dual Mode Performance Exhaust, and Navigation system. There were many other options available, but this would do everything we want to do very nicely. (Factory specs list performance at 4.0 second 0-60mph and 12.3seconds @116 in the quarter mile as equipped.)

Only slightly behind schedule, the Camaro arrived at Papik motors on January 20th. I had asked David to, upon arrival, keep all tags, stickers, and labels that came with the car. It was preferred that they keep the seats wrapped, not put on a dealer sticker, and certainly not drill for a front license plate. We also agreed that if roads were salty/snowy that they wouldn’t do a dealer check-out drive. (I know, I can be a little fanatical about my cars.) This was all fine with them, and Papiks even took a series of photos for me as the car was on the transport and unloaded.

Joyce and I went to Luverne the next day with an enclosed trailer to bring the car home. David had the car inside, spotless, and looking beautiful!  Four miles were on the odometer. As requested, plastic wrap and tagged/packaged items were everywhere. After completing the usual paperwork and, of course, writing a check, we were the proud owners of a Camaro Fifty. Some orientation on the operation of all the electronics (which will take more study), and we were ready to head home.

As I write this, five weeks later, we have 189 miles on the car. We displayed the car in the Winterfest of Wheels car show in early February (enclosed trailer again), but did get it out for a nice, dry drive on an unusually warm mid-February day. I love the car!  The ride is excellent for a performance sports coupe. It’s much quieter inside than our previous Camaro, and the LT1 engine has strong, smooth power whenever called upon. They say the break-in period is 1500 miles before one should really run one of these hard, and I’ll follow that. It is, however, torture.

So, you ask, will this car spend its life in an enclosed trailer? No way!  It’ll be a summer driver and will see some trips around the country. We have a trip to the Black Hills planned in the spring and I think that’ll be a perfect place to enjoy a car like this!

My question for you is: how many cars have seduced you?